On this page you find more information on LIGA’s ongoing (and past) research projects.

STaR-AD: The role of short tandem repeats in Alzheimer’s disease

Tandem repeats are types of repetitive elements in the human genome that are arranged in a tandem (i.e. head-to-tail) pattern of variable motif size. Although a disease-causing role of longer-than-normal short tandem repeats (STRs) has been established for nearly three dozen disorders, systematic research into the role of STRs in human disease was hindered until recently by limitations of both sequencing technology and downstream computational analyses. In the “STaR-AD” project, we will systematically investigate the potential role of STR expansions in contributing to AD liability. In collaboration with partners at the Competence Center for Genomic Analysis at UKSH-Campus Kiel as well as several collaborators in the US, France and Australia, the LIGA-led study aims to shed new light on the role that STRs play in the onset and progression of Alzheimer’s disease. STaR-AD is also linked to the “Alzheimer’s Genome Project”, led by long-standing LIGA collaborator Prof. Rudolph Tanzi at Harvard Medical School. Within LIGA, Valerija Dobricic will serve as the overarching Principal Investigator of this exciting new project which is the first of its type in Alzheimer’s disease. See also this link for a press release of University of Lübeck on STaR-AD (in German). Funding: DFG (from January 1, 2022 – June 30, 2025).

Cognitive decline and the development of age-related conditions such as Alzheimer’s disease (AD) are determined by the concerted action of genetic, epigenetic and non-genetic factors. Over the last decade, genetics research in AD has progressed at unprecedented pace owing to the application of high-throughput genotyping technologies in the context of genome-wide association studies (GWAS). However, it is becoming increasingly evident that variants of the DNA sequence themselves do not fully explain AD’s phenotypic picture and that other mechanisms, such as those related to epigenetics, must make substantial contributions to disease development and progression. In this project, we study the impact of epigenetics on three important domains. First, we aim to decipher the correlation of DNA methylation (DNAm) patterns in brains and buccal swabs from the same individuals examined neuropathologically at the Massachusetts Alzheimer’s Disease Research Center (MADRC). Second, we aim to perform one of the largest epigenome-wide association studies (EWAS) to date on AD-relevant neuropsychiatric phenotypes in participants from the Berlin Aging Study II (BASE-II). Third, we will assess expression levels of micro-RNAs derived from BASE-II plasma samples to perform one of the first miRNA-based transcriptome-wide association studies in the field. Our project is one of eight subprojects from the CIRCUITS-AD consortium led by NIH Epigenomics Road Map PI Dr. Manolis Kellis at MIT, Cambridge, USA. Funding: Cure Alzheimers Fund (from December 1, 2016 – December 31, 2023).

MiRNetAD: The role of microRNAs in Alzheimer’s disease

MicroRNAs (miRNAs) are small, non-coding RNAs that down-regulate RNA expression by specific, complementary binding. Since each miRNA typically targets several different RNAs, regulatory networks emerge. In MiRNetAD we will elucidate these networks by combining cutting-edge high-throughput genomics technologies with state-of-the-art in vivo functional modeling to decipher the connection between microRNA-RNA regulatory networks and dysfunction of the entorhinal cortex (EC)-hippocampal (HPC) neural circuit in AD.  MiRNetAD  represents one of 131 recently funded Joint Sino-German Research projects for which LIGA will collaborate with the the group of Professor Ling-Qiang Zhu at Huazhong University in Wuhan, China. The projects connects well with LIGA’s other ongoing efforts to elucidate the role of miRNAs in Alzheimer’s and Parkinson’s. LIGA’s lead scientist and data analyst for the MiRNetAD project is Marcel Schilling. Funding: DFG and NSFC (from January 1, 2018 – December 31, 2021).

The LifeBrain project aims to identify determinants of human brain development, cognitive functioning, and mental health and establish a solid knowledgebase for understanding how these three domains can be optimized throughout life. Specifically, the project intends to integrate the data from 11 longitudinal, mostly population-based cohort studies investigating cognitive and mental health from birth to old age.  We plan to link these to national registries, biobanks and data from other large studies, and also enrich them with novel data. The LIGA team will be in charge of all genetic and epigenetic experiments conducted as part of LifeBrain. To this end, we will analyse DNA extracted from blood, saliva and buccal swabs for their genetic and epigenetic profiles using high-throughput technologies.  For more information on the LifeBrain projects and our international collaborators, please visit the official LifeBrain website. Funding: European commission (from January 1, 2017 – June 30, 2022).

BASE-II is a multidisciplinary and multi-institutional project that ascertains a large number of ageing-related variables with the aim to identify and characterize the factors associated with ‘healthy’ vs. ‘unhealthy’ ageing. BASE-II is a collaboration between University of Lübeck, Max Planck Institute for Human Development, the German Institute for Economical Research, Charite University Medicine, Humboldt University Berlin, Free University Berlin, and the University of Tübingen. In BASE-II LIGA is in charge of conducting all molecular genetic (funded by the BMBF) and epigenetic experiments (funded by the Cure Alzheimer Fund). For more information on BASE-II see this page. Funding: Cure Alzheimer’s Fund (from Dec 1, 2016 – Dec 31, 2023).

Collaborative research group with the aim to investigate the nature and mechanisms of reduced penetrance in several movement disorders, predominantly Parkinson’s disease and dystonia. ProtectMove is made up of research teams from Lübeck, Kiel, Bolzano, Luxembourg and Vancouver, and is funced by the Deutsche Forschungsgemeinschaft (DFG). The LIGA team co-led four out of the eleven ProtectMove research projects from phase 1 of the project, including the implementation of a genome data analysis core (GDAC; LIGA Co-PI Lars Bertram) unit and GWAS projects for all three of the main diseases: XDP (Sub-project 5; LIGA Co-PI Lars Bertram), dystonia (Sub-project 6; LIGA Co-PI Lars Bertram), Parkinson’s disease (Sub-project 7; LIGA Co-PI Christina Lill). For more information on ProtectMove, its projects and progress, please visit the official project website. Funding: Deutsche Forschungsgemeinschaft – DFG (from Dec 1, 2016 – Dec 31, 2021).

MDSGene represents the newest addition to LIGA’s catalog of online genetic databases. MDSGene was developed by the LIGA team in collaboration with researchers in Lübeck and elsewhere. The database systematically links reported genetic mutations with movement disorder phenotypes and other demographic and clinical information and is freely available to the public at www.mdsgene.org. MDSGene is in part financed by the International Parkinson and Movement Disorder Society (MDS) and was officially launched at the 20th International MDS Congress in Berlin, Germany, in June 2016. To learn more about MDSGene see the editorial by Lill et al, 2016 in the journal Movement Disorders. Funding: Movement Disorder Society – MDS (Jan 1, 2015 – Dec 31 2017) 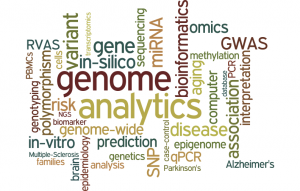 In addition to the above mentioned individually funded projects, LIGA is involved in a number of additional collaborative studies aimed at identifying novel genetic and epigenetic factors underlying susceptibility of complex diseases. One main focus of this work are neurodegenerative and neuroimmunological diseases such as Alzheimer’s disease (e.g. in the context of the “European Medical Information Framework – Alzheimer’s disease” [EMIF-AD] study, or the “Alzheimer’s Genome Project” [AGP] together with Rudy Tanzi’s group at Harvard Medical School), Parkinson’s disease (e.g. in collaboration with the “Genetic Epidemiology of Parkinson’s disease” [GEO-PD] consortium, the “Parkinson’s disease in Denmark” [PASIDA] study together with Beate Ritz’s group at UCLA, and the “EPIC4PD” study together with Lefkos Middleton at Imperial College London, UK), Frontotemporal Lobar Degeneration (e.g. as part of the FTLD Research Consortium), and Multiple Sclerosis (e.g. in collaboration with the “International MS Genetics Consortium” [IMSGC]). For information on our involvement in genetic studies of other traits and diseases please see also our up-to-date list of publications.