On August 1, 2022, long-term LIGA member Christina Lill was appointed full (W3) Professor for Translational Epidemiology at Westfälische-Wilhelms-Universität Münster. Initially, the professorship is supported by the “Heisenberg Program” of the Deutsche Forschungsgemeinschaft (DFG). Christina has been affiliated with the LIGA group (and its predecessors, e.g. at MPI for Molecular Genetics in Berlin) since 2009. The new appointment in her hometown Münster was the result of Christina’s successful application for a Heisenberg-Professorship at the DFG. A major goal of her Heisenberg project is to develop predictive models that can identify high-risk individuals for neurodegenerative diseases using molecular biomarkers from blood. This would pave the way for the development of effective preventive and early therapeutic therapies for these currently incurable diseases. We look forward to continuing the collaboration with Christina’s new group in Münster! Follow this link to find out more about Christina’s new position at WWU.

New LIGA paper on DNA methylation in brain and periphery

Our collaborators at Charité university hospital in Berlin, Germany, have recently extended their ongoing projects assessing the relevance of so called “epigenetic clock” estimates in advance age. To this end, the LIGA team had generated high-resolution DNA methylation profiles in participants of the Berlin Aging Study II (BASE-II). In their newest analyses, the BASE-II team – with the help of Yasmine Sommerer and Lars Bertram from LIGA – found that vitamin D supplementation (to treat vitamin D deficiency) is associated with slower epigenetic aging (Vetter et al, 2022a). In a second analysis (Vetter et al., 2022b), we investigated the role of perceived stress on epigenetic aging as measured by DNA methylation. Although a growing body of literature suggests an association between higher (=older) epigenetic age and stress or trauma during early childhood, the current study found no evidence for an association of perception of stress with DNAmAA in older people from BASE-II, suggesting that different mechanisms are at work in young vs. old people.

In collaboration with their partners at Oxford and London, the LIGA group recently completed two projects on the role of micro-RNAs in Alzheimer’s (AD) and Parkinson’s disease (PD). This work extended earlier meta-analytic projects led by the LIGA team combining published evidence on the topic (see papers by Takousis et al, 2019 and Schulz et al. 2019). Our new work took the main results of these meta-analyses and tested them in two unique and independent collections of human brain samples contributed by our collaborators in the UK. Specifically, the first new study (published in Translational Psychiatry) revealed that micro-RNAs miR-129-5p, miR-132-5p, and miR-138-5p, and miR-195-5p are differentially expressed in Alzheimer’s. Interestingly, the second study (now in press in the journal Brain Communications) also found miR-129-5p and miR-132-5p to be differentially expressed in Parkinson’s. In addition, this latter work also implied PD candidate miR-132-3p to be associated with both disorders. Collectively, these results point to a “common micro-RNA signature” in both AD and PD, potentially pinpointing shared pathogenic mechanisms across these two neurodegenerative diseases. Both studies were spearheaded by LIGA member Valerija Dobricic who also served as first author on both papers.

Two papers imply DTNB and other genes in Alzheimer’s

Two papers with LIGA contributions implicating rare variants in the DTNB and other genes in Alzheimer’s disease. The first paper (by Neumann et al.) utilized whole-exome sequencing data in a subset of participants of the EMIF-AD MBD study and utilized a novel analysis algorithm for CSF biomarker data to arrive at DTNB, FFO1, NLRC3 and SLC22A10 as putative disease genes. The study was led by our EMIF-AD collaborators at VIB in Antwerp and utilized CSF biomarker data which was combined by principal component analysis as outcome. The second study (by Prokopenko et al.) was led by our long-standing collaborators at Harvard Medical school and used whole-genome sequencing data in several family-based and case-control Alzheimer’s datasets. By applying a novel algorithm to group rare variants into genomic regions, this study, too, independently implicated rare variants in DTNB (and DLG2) to be linked to Alzheimer’s. DTNB (encoding: beta dystobrevin) is an interesting candidate owing to its role in postsynaptic membranes of excitatory synapses in the human brain. Both papers were published in the journal Molecular Psychiatry in Februrary and March of 2022. 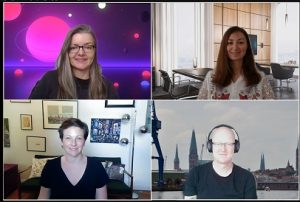