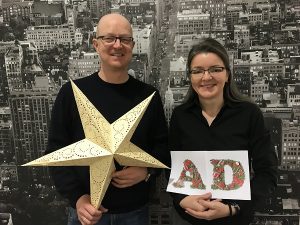 Just before Christmas 2019 the DFG announced that LIGA researchers Drs. Valerija Dobricic and Lars Bertram will receive nearly €450,000 for a project aimed at deciphering the role of short-tandem repeats (STRs) in Alzheimer’s disease (AD). The application was submitted in response to the DFG’s second call for “Next Generation Sequencing” (NGS) projects in mid 2019. In collaboration with partners at the Competence Center for Genomic Analysis at UKSH-Campus Kiel as well as several collaborators in the US, France and Australia, the LIGA-led study aims to shed new light on the role that STRs play in the onset and progression of Alzheimer’s disease. The project is linked to the “Alzheimer’s Genome Project”, led by long-standing LIGA collaborator Prof. Rudolph Tanzi at Harvard Medical School. In our group, Valerija Dobricic will serve as the overarching Principal Investigator of this exciting new project which is the first of its type in Alzheimer’s disease. See also this link for a press release of University of Lübeck on STaR-AD (in German). Funding: DFG (from October, 2020 – September, 2023).